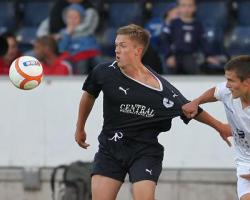 Falkirk 1-3 Rangers: Match Report - view commentary, squad, and statistics of the game as it happened.Gers fight back to winDean Shiels marked his first Rangers start of the season with the crucial second goal as the Light Blues came from behind to claim a 3-1 League Cup third-round win over Falkirk.The Bairns took a fifth-minute lead at the Falkirk Stadium when former Ibrox youth Rory Loy pounced on a mistake by visiting goalkeeper Steve Simonsen to score.But the lead lasted barely 90 seconds as Bairns midfielder Owain Tudur-Jones turned a Stevie Smith cross into the roof of his own net.That left it to Northern Irishman Shiels to put the Glasgow side on course for Wednesday's quarter-final draw as he darted beyond the home defence on 65 minutes to beat Falkirk stopper Jamie MacDonald with a low drive.Falkirk had a decent shout for a penalty when Loy's shot hit Bilel Mohsni's hand in the box with a minute left.But referee Alan Muir was unmoved and Ian Black put a gloss on the scoreline with his dipping 25-yard effort deep into stoppage-time.Rangers were without their talented youngster Lewis Macleod and on-form striker Nicky Clark after both were injured in the dismal 1-1 draw with Alloa's part-timers on Saturday.But the Light Blues had Lee Wallace back after a calf strain ruled him out at the weekend.Shiels was also thrown into action following four substitute outings as he partnered Kris Boyd up front.But for the fifth game in a row it was the Scottish Premiership's record scorer who trudged off with a frown after failing to find the net.McCoist had complained his side had failed to play to a high enough tempo on Alloa's "horrible" plastic pitch.And they slipped up again on Falkirk's synthetic surface when Loy struck his early opener.Mohsni gifted possession to Blair Alston and the young midfielder fired in a low strike which should have been comfortable for Simonsen

The Englishman, though, spilled the ball right into the path of Loy who made no mistake from five yards out.The goal, though, sparked an immediate response as Rangers' probing down the left paid off

Shiels showed no ill-effect of his spell on the sidelines as he collected the ball 25 yards out under pressure before spinning well and finding Smith on the wing.Smith sent in an dangerous ball across the front post which tempted the stretching Tudur-Jones into an error as he sent the ball into his own net.Shiels had stumbled when he had just keeper Jamie MacDonald to beat 90 seconds in and blew another opportunity to put his side ahead moments after the own goal when he fired straight at the former Hearts number one before seeing David McCracken clear his follow-up attempt.Black then fired wide with a long-range attempt, but Falkirk had their chances too, with Tom Taiwo sending a curling effort just wide after Mohsni's slip let in the Bairns again.The frantic pace of the opening quarter-hour dropped, but McCoist would have been pleased with his side's fighting qualities

The same cannot be said of their sloppiness in the final third.Neither will the manager have been happy with Mohsni's habit of handing the ball to the hosts in dangerous territory

The Tunisian was at fault again five minutes into the second half when he gifted possession to Loy, but Alston could only fire straight at Simonsen after being teed up by his team-mate.David Templeton rescued the Ibrox men with his late weekend equaliser and he was soon sent as McCoist withdrew Fraser Aird after another ineffectual evening.But the winger's trickery was not required as Rangers netted a goal of embarrassing simplicity.A long punt from MacDonald was met by first by a Wallace header, then another by Nicky Law, with the former Motherwell midfielder nodding beyond the Falkirk back four just as they were pushing up

That put Shiels in a foot race with McCracken, but there was only ever going to be one winner as the former Kilmarnock man fired home.There was a couple of hairy moments for the League One champions, though, notably when Loy's shot struck Mohsni's outstretched arm with the clock ticking towards 90.But Rangers survived and sealed victory when Black curled a looping shot over MacDonald in the final minute